How do I know how high my home’s radon levels are?
Testing is the only way to know if you and your family are at risk from radon. EPA and the Surgeon General recommend testing all homes below the third floor for radon.

You cannot predict radon levels based on state, local, and neighborhood radon measurements. Do not rely on radon test results taken in other homes in the neighborhood to estimate the radon level in your home. Homes which are next to each other can have different radon levels. Testing is the only way to find out what your home’s radon level is.

How does radon cause cancer?
All radioactive elements break down (radioactive decay) over time through a process measured in half-lives. As these elements breakdown, they actually create entirely new elements, each with its own specific half-life. Each time a new element is created, it releases more radiation. The faster this occurs, the more the radiation is produced. As radon breaks down, it creates other radioactive elements called radon progeny or daughters – each with even shorter half-lives that break down again, again and again
in half-lives from minutes to just fractions of a second.

Each time an element breaks down, it explodes with energy, radioactive energy strong enough to form a small crater on glass when observed through a microscope. If these explosions occur within the human body, for example while breathing, the radiation can be deposited on a cell, either killing it or forcing it to repair itself. Fortunately, cells often do an excellent job of repairing themselves but sometimes, the DNA structure within the cell changes. The mutated cell then begins to multiply and
cancer begins to spread. The more cells that are exposed to radiation, the greater the risk of cell mutation.

Children’s cells are still growing and changing rapidly so they are at the greatest risk as well as anyone who spends a great deal of time at home. Unfortunately, the human body does not produce symptoms or warning signs to alert us when being exposed to radiation. Radon causes cancer, but does not cause headaches, nausea or other feelings of ill health. Most people won’t know they have cancer until they hear it from their doctor. The only way to know if your family is being exposed is to test.

How is radon measured?
Radon is measured in pico-Curies per liter of air (pCi/L), a standard unit used worldwide for radiation to measure the number of decays (radioactive explosions) that occur within 1 liter of air every 60 seconds. It was named after Madame Curie.

1 pCi/L equals 2.2 radioactive explosions every minute in every liter of air. That doesn’t sound like much until you consider the amount of air within a house. For example, a 1,000 square foot home with 4pCi/L will have about 2 million explosions occurring in that house every single minute of every day.

How does radon compare to other forms of radiation?
If you live in a home for 1 year that has exactly 4.0 pCi/L then your radiation exposure is the same as 200 chest x-rays per year. This is based on time exposed so if you are only home half the time, cut the amount of x-rays in half. If your radon level is twice that amount, then double the number of x-rays.

The Nuclear Regulatory Commission requires all nuclear power plants to put fences around each facility at a distance far enough away so that a person standing at the fence line will not receive any more radiation than 25 mRem. They use the same formula for around nuclear waste sites. That’s a lot of “ticks” on a Geiger counter and a house with 4 pCi/L is worse than that! Just because you can’t see the radiation doesn’t mean it’s not there.  X-ray technicians wear lead aprons and stand as far away as
possible. Take the same approach by either reducing the amount of radon in your home or stay away
from home as much as possible. It’s usually much easier just to have the radon problem fixed. 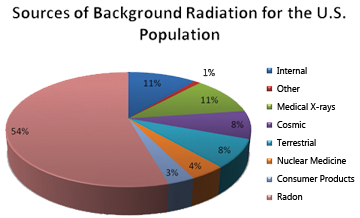 How do I reduce the amount of radon in my home?
The most effective way to get rid of radon is to install a removal system that draws the radon out of the soil before it even has an opportunity to enter the house. These systems are called “Sub Slab Depressurization Systems” or “Active Soil Depressurization Systems”. These systems operate by using a piping and fan system that depressurizes the soil that surrounds the home. This in effect reverses the pressure differential between the soil and the lower portion of your home. You’ll still have the same pressures within your house that you’ve always had and never noticed, but the radon will be vented safely outside so that it can dissipate harmlessly into the atmosphere. It doesn’t take much of a pressure differential to draw radon into a home, and it doesn’t take a lot of pressure to draw it out.

Are there other health benefits from a sub-slab depressurization system?
Of course the single largest benefit of having a radon removal system is low radiation exposure and a greatly reduced chance of getting cancer, but many other benefits have also been reported. As radon removal systems safely exhaust the radon, they also remove other chemicals and gases that are commonly found in the soil around our homes like insecticides, pesticides, herbicides, methane and carbon dioxide. Cleaner air means better health. The systems also remove moisture from the ground and can help to keep basements drier and prevent mold growth.

Have scientists found any correlation between radon and other diseases besides lung cancer?
“In a study conducted at the University of North Dakota , researchers discovered that the presence of radioactive radon daughters in the brains of non-smoking persons with Alzheimer’s and Parkinson’s  disease was 10 times greater than it was in the brains of persons with no previous evidence of neurological disorders.” For more information click on the following link: http://www.radonnews.org/pages/AlzeheimersParkinsons.html

“The north-west of Ireland appears to have one of the highest prevalence rates of Multiple Sclerosis in Ireland though there is as yet no reliable national database,” said the report. “The area is one of the highest radon-emitting areas in Ireland , with Donegal, in particular, containing some of the most highly uranium-enriched granites in the country.” Multiple sclerosis is a chronic neurological condition which has no cure. Its cause is unknown although it is likely to be genetic, as well as triggered by environmental factors. For more information click on the following link:  http://www.mult-sclerosis.org/news/Jan2003/MSandRadonGas.html

What is the cost of installing and running a radon mitigation system vs.  lung cancer treatment
for a year?
The average exterior radon mitigation system supplied by our company is $665. The average cost to run the system for a year is about the same as keeping a light on, approximately $60. The cost of lung cancer treatment for a year is approximately $45,000.